The first 3 years of PLANETS saw (further) development of Dioscuri and UVC by KB-NL and IBM respectively. In Year 4 as part of an emulation integration project Dioscuri and UVC were developed into a version with a PLANETS wrapper. This way they could be deployed in the Interoperability Framework (IF) in a local deployment as migration by emulation services.

An important step was the development of the [CreateView?] command used to fire-up the emulators from within the PLANETS Testbed and PLATO. In the second half of Year 4 the wrapped Dioscuri and UVC were further developed into webversions so they could be deployed on the Central Instance also.

Dioscuri is the name for the emulator developed by Planets partners the National Library of the Netherlands (KB-NL) and the Nationaal Archief of the Netherlands (NANETH). Dioscuri refers to the Greek myth of the twins Castor and Pollux of who one of them is mortal while the other is immortal. This symbolically represents the idea behind emulation: giving mortal digital objects their immortal equals.

Dioscuri is especially designed for digital preservation by being more durable and flexible than other emulators. The design shows a modular emulator, whereby each hardware component is represented as a module in the emulator. By combining all modules a full hardware emulator is created. 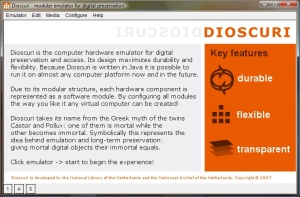 Dioscuri is capable of running PC software from around the 80s and 90s era. It mimics the following hardware:

As Dioscuri runs on the Java Virtual Machine (JVM) it is very flexible in running on most current computer platforms. It requires JVM 1.6 or higher.